Nestled in the heart of Cambridgeshire sits a bustling market town called St Ives. Sitting just 15 miles from the centre of Cambridge, this picturesque town can be found on the River Great Ouse, which helped establish it as a prosperous market town in the 11th Century, allowing traders and travellers to transport their goods with ease.

Today, residents and locals avoid having to cross the river by boat, thanks to the 15th century bridge which remains in place. Every day, hundreds of people pass over St Ives Bridge, often with little recollection of its history. But, with an existence that spans over six centuries, St Ives Bridge has its roots firmly planted as one of the most prominent features of the market town.

Take a short trip through the history of St Ives Bridge with our latest blog, learning how and why it was constructed all those years ago, and continues to exist with much of its original stonework design. 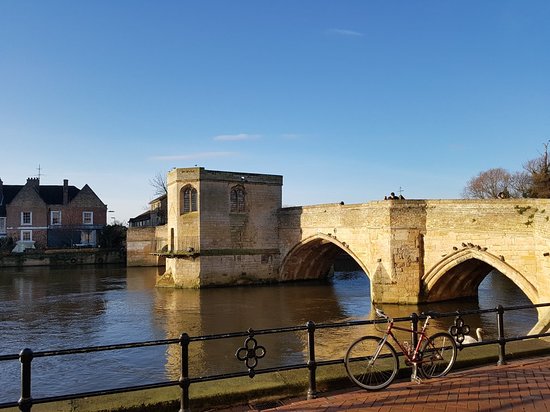 It was the later part of the 10th Century when St Ives was first established and named as the village of Slepe. The word ‘Slepe’ is derived from the Saxon word for ‘muddy,’ and therefore makes it a fitting name for the then village of St Ives - which had no bridge. Before the introduction of locks on the Great Ouse, the river would have been wider and more shallow, making it easier for locals to cross, but also would have left you very muddy.

By the turn of the 11th Century, Slepe had been acquired by the Abbots of Ramsey who set out to turn the town into a prosperous venture. It was a popular town for travellers and tradesmen to stop in, particularly due to being situated on one of the main waterways within East Anglia.

As part of their method to monetise Slepe, there are speculations that a timber bridge was constructed around the year of 1107, allowing users to cross the river and into the town without having to muddy their clothes or arrive at their destination soaked through. As a busy passage for traders and travellers alike, tolls were introduced on the bridge, creating a valuable income for the local monks.

Over the next few centuries, the town of St Ives continued to grow significantly, and by the 15th Century, traffic travelling across and under the bridge had increased to a level where the timber bridge had weakened to the extent that it needed replacing. And so, around the year of 1426, a stone bridge was constructed - the majority of which still remains and can be seen today. 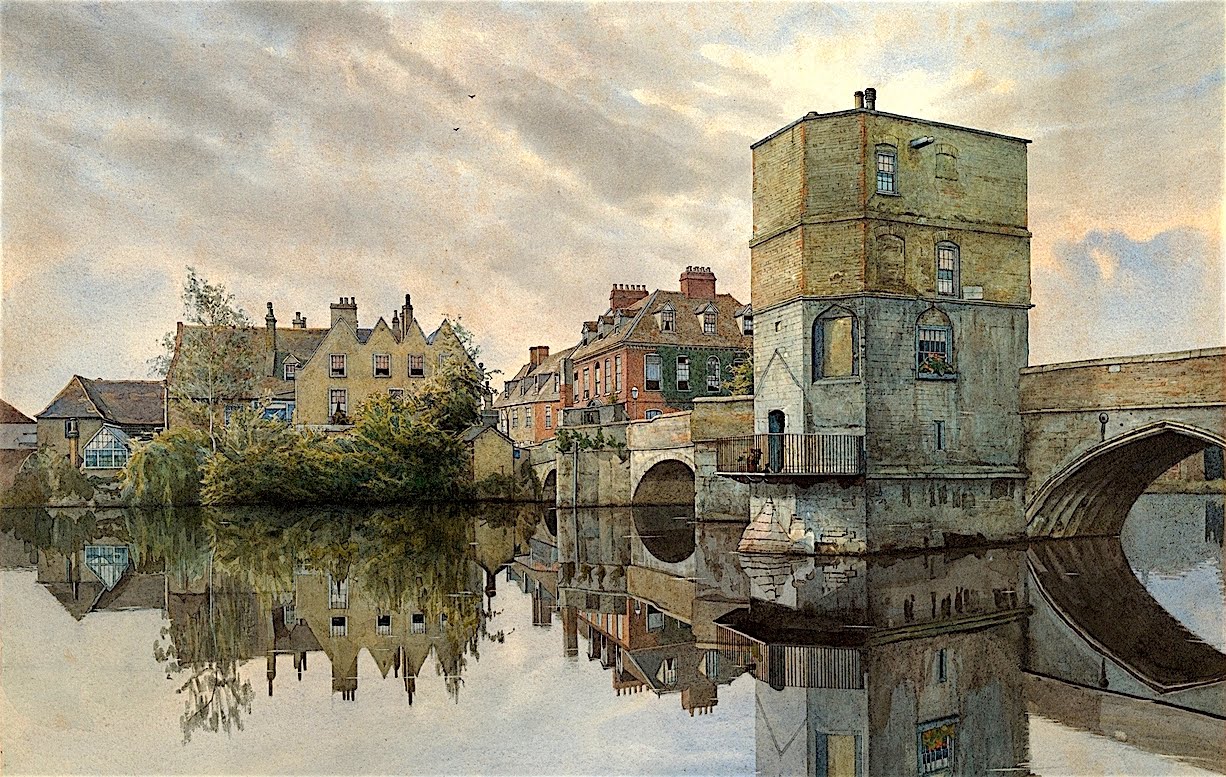 Fortunately, St Ives Bridge existed relatively peacefully until the year 1645 when the English Civil War led to a partial demolishment of the southernmost point by Oliver Cromwell, who was trying to prevent King Charles I’s trrops from approaching London from its Royalist base in Lincolnshire.

Instead of fixing the bridge to its original state, he replaced the bridge’s rubble with a drawbridge as a defensive measure, allowing Cromwell and his troops to hold onto the town of St Ives.

After the English Civil War, the drawbridge was later removed in 1716 and replaced by stone arches, which were funded by one of the town’s major landowners, Charles I Duke of Manchester. Unfortunately, the stone arches were a different shape to the original on the North side, leaving two rounded arches on the south and two pointed, Gothic-style arches on the North.

The Chapel on St Ives’ Bridge - also known as ‘The Chapel of St Ledger’ - was built as part of the construction of the stone bridge back in the 15th Century. From records, the chapel’s altar was consecrated in 1426, but there are little records about its exact date of build.

It wasn’t unusual for chapels to be added to stone bridges of the time. In fact, such chapels were quite common in medieval times, often serving as toll-houses to allow travellers to pray or pay thanks for their journeys. They would also occasionally host church services for the local community.

Little is known about the use of St Ives’ Bridge Chapel during the 15th Century, other than the common use of chapels at the time operating as toll houses. It wasn’t until the year 1570, when the chapel was bought from the crown by town localsHugh Counsell and Robert Pistor and recordings were made when the pair decided to convert it into a dwelling house. Despite needing to be rebuilt after the Great Fire of St Ives in 1689, it remained in use as a house until the early part of the 20th Century.

By 1930, the original building work of St Ives Bridge Chapel was badly damaged - mainly due to years of alteration work, inclduing the addition of many windows which weakened its overall structure. As a result, the stonework was renovated to its former 15th Century structure and design, and the old roof was returned to its original position.

Today, the chapel remains largely identical to its original, 600-year-old design, except for the stone parapets, which were part of the 1930 rebuild. It is also registered as a Grade I building by English Heritage. 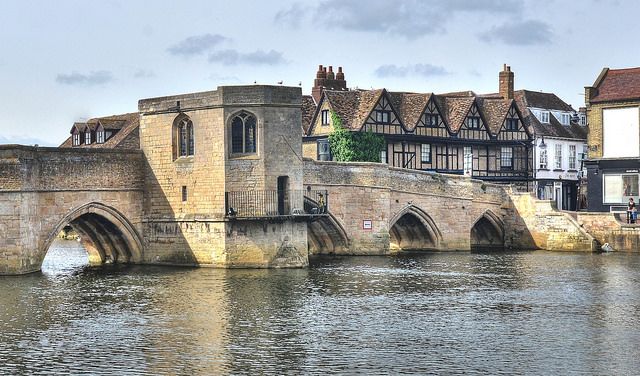 Today, St Ives’ Bridge remains preserved as close as possible to its original state and is one of nine Scheduled Ancient Monument Grade I buildings in Cambridgeshire. This means all maintenance that is carried out on the stonework has to be in line with preserving its aesthetic and functional aspects.

For individuals and families looking for places to explore and visit in Cambridgeshire, St Ives is an obvious choice. Bridge aside, St Ives is a thriving local market town, filled with plenty of shops, eateries and other amusements to keep you entertained. There’s even the Norris Museum, conveniently located close to the Bridge, where you can learn even more about the history of St Ives Bridge and the local area as a whole.

Anyone can visit the bridge free of charge, as it is used every single day by local townsfolk and visitors who need regular access between the older and newer parts of the town. The inside of the Chapel can also be viewed, however, according to local knowledge, you will need to obtain a key from the Norris Museum or Town Hall to do so.

No trip to St Ives is complete without a trip to its market too. St Ives is historically a market town, with local traders having sold their goods here since the year 1912. St Ives market takes place every week on Mondays and Fridays, between the hours of 08:30am - 2:00pm. The town also holds a large bank holiday Monday market, drawing in traders from across the country.

Further information about St Ives market and others in the area of Cambridgeshire can be found here.

With our depot and office located around a 10 minute drive away, Dews Coaches is ideally situated for those in St Ives looking for private coach hire.

Whether you’re looking to hire an executive coach for a large, private event, or discover a charming vintage bus in Cambridgeshire to use on your wedding day, we have a whole fleet of environmentally-concious vehicles for you to choose from.

To find out more about the coaches we have available to hire in St Ives, Peterborough and the other areas in Cambridgeshire, please get in contact today. A member of our Customer Liasion Team will be happy to assist with your query and booking.#